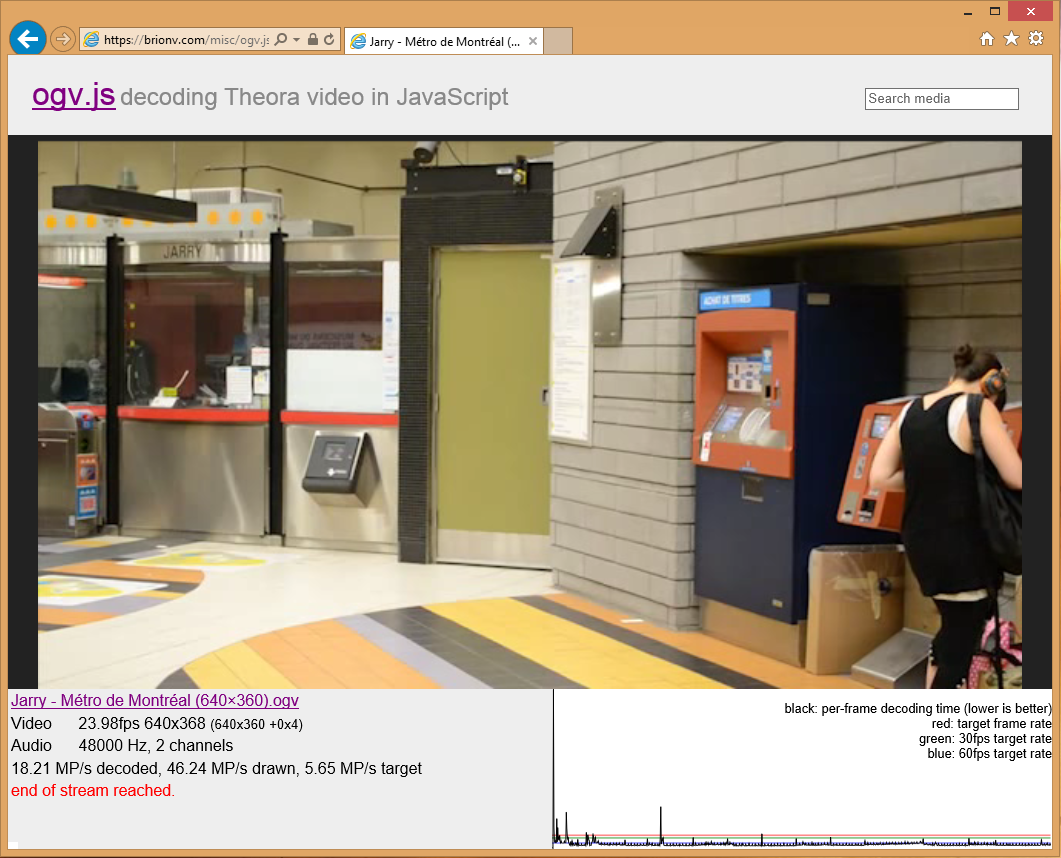 One of my fun little side projects is ogv.js, a prototype audio/video decoder in JavaScript to allow playback of Wikimedia Commons’ media files on browsers that don’t natively support the royalty-free Ogg Vorbis, Theora or WebM codecs, but may have trouble with our old ‘Cortado’ Java applet compatibility solution thanks to the modern trend of disabling plugins (and Java in particular).

Mostly this means Internet Explorer and Safari — Chrome and Firefox handle the files natively. However Internet Explorer was limited by the lack of support for the Web Audio API, so could not play any sound. I’d hypothesized that a Flash shim could be used — Windows 8 ships with the Flash plugin by default and it’s widely installed on Windows 7 — but had no idea where to start.

Open source to the rescue!

One of the old maintainers of the Cortado applet, maikmerten, took an interest. After some brief fixes to get the build scripts working on Ubuntu, he scrounged up a simple ActionScript audio shim, with source and .swf output, and rigged up the ogv.js player to output audio through that if there was no native Web Audio API. 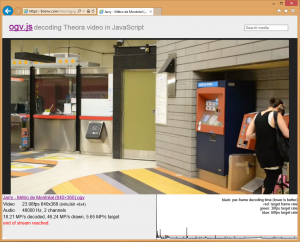 The ActionScript of the Flash shim is pretty straightforward, and it compiles into a nice, approx 1kb .swf file. Luckily, you can rebuild the .swf with the open-source Apache Flex SDK, so it doesn’t even rely on proprietary Flash Builder or anything. We could do with some further cleanup (for instance I don’t think we’re disposing of the Flash plugin when shutting down audio, but that’s easy to fix in a bit…) but the basics are in place. And of course getting proper audio/video sync will be complicated by the shim layer — the current code drives the clock based on the video and has choppy audio anyway, so there’s some ways to go before we reach that problem. ;)

It even works on Windows RT, the limited ARM version of Windows 8 — though the video decoding is much too slow on a first-gen Surface tablet’s Tegra 3 CPU, audio-only files play nicely.

One thought on “ogv.js now with sound in Internet Explorer thanks to… Flash?”