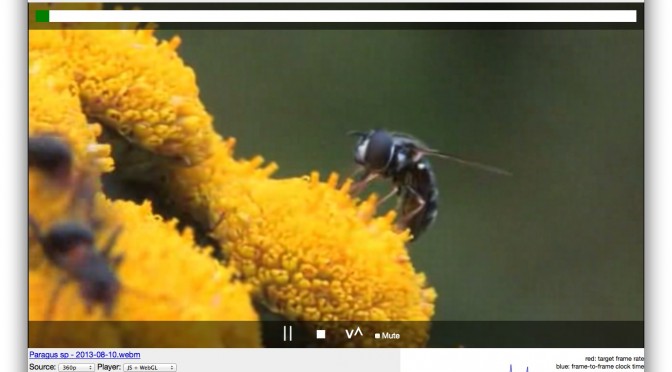 Try the demo and select ‘JS + WebGL‘, ‘Flash’, or even ‘Flash + GPU‘ from the drop-down! (You can also now try playback in the native video element or the old Cortado Java applet for comparison, though Cortado requires adding security exceptions if your browser works with Java at all these days. :P)

The Flash target builds the core C codec libraries and the C side of the OgvJs codec wrapper using Crossbridge, the open-source version of Adobe’s FlasCC cross-compiler. This is similar in principle to the emscripten compiler used for the JavaScript target, but outputs ActionScript 3 bytecode instead of JavaScript source.

I then ported the JavaScript code for the codec interface and the player logic to ActionScript, wrapped it all up into a SWF using the Apache Flex mxmlc compiler, and wrapped the Flash player instantiation and communication logic in a JavaScript class with the same interface as the JS player.

WebGL is a JavaScript API related to OpenGL ES 2, exposing some access to GPU programming and accelerated drawing of triangles onto a canvas.

Safari unfortunately doesn’t enable WebGL by default; it can be enabled as a developer option on Mac OS X but requires a device jailbreak on iOS.

However for IE 11, and the general fun of it, I suspected adding GPU acceleration might make sense! YCbCr to RGB conversion and drawing bytes to the canvas with putImageData() are both expensive, especially in IE. The GPU can perform the two operations together, and more importantly can massively parallelize the colorspace conversion.

I snagged the fragment shader from the Broadway H.264 player project’s WebGL accelerated canvas, and with a few tutorials, a little documentation, and a lot of trial and error I got accelerated drawing working in Firefox, Chrome, and Safari with WebGL manually enabled.

Then came time to run it on IE 11… unfortunately it turns out that single-channel luminance or alpha textures aren’t supported on IE 11’s WebGL — you must upload all textures as RGB or RGBA.

Copying data from 1-byte-per-pixel arrays to a 3- or 4-byte-per-pixel array and then uploading that turned out to be horribly slow, especially as IE’s typed array ‘set’ method and copy constructor seem to be hideously slow. It was clear this was not going to work.

I devised a method of uploading the 1-byte-per-pixel arrays as pseudo-RGBA textures of 1/4 their actual width, then unpacking the subpixels from the channels in the fragment shader.

The unpacking is done by adding two more textures: “stripe” textures at the luma and chroma resolutions, which for each pixel have a 100% brightness in the channel for the matching packed subpixel. For each output pixel, we sample both the packed Y, Cb, or Cr texture and the matching-size stripe texture, then multiple the vectors and sum the components to fold down only the relevant channel into a scalar value.

It feels kinda icky, but it seems to run just as fast at least on my good hardware, and works in IE 11 as well as the other browsers.

On Firefox with asm.js-optimized Theora decoding and WebGL-optimized drawing, I can actually watch 720p and some 1080p videos at full speed. Nice! (Of course, Firefox can already use its native decoder which is faster still…)

A few gotchas with WebGL:

Once I had things working so nicely with WebGL, the Flash version started to feel left out — couldn’t it get some GPU love too?

Unluckily, Stage3D and WebGL are gratuitously different in API signatures. Meh, I can work with that.

You’re apparently expected to write shaders in a low-level assembly language, AGAL… and manually grab an “AGALMiniAssembler” class and stick it in your code to compile that into AGAL bytecode. What?

Luckily there’s also a glsl2agal converter, so I was able to avoid rewriting the shaders from the WebGL version in AGAL manually. Yay! This required some additional manual hoop-jumping to make sure variables mapped to the right registers, but the glsl2agal compiler makes the mappings available in its output so that wasn’t too bad.

Some gotchas with Stage3D:

I’ll do a little more performance tweaking, but it’s starting to look like it’s time to clean it up and try integrating with our media playback tools on MediaWiki… Wheeeee!