One of my pet projects is ogv.js, a video/audio decoder and player in JavaScript powered by codec libraries ported from C with Mozilla’s emscripten transpiler. I’m getting pretty close to a 1.0 release and deploying it to Wikimedia Commons to provide plugin-free Ogg (and experimentally WebM) playback on Apple’s Safari and Microsoft’s Internet Explorer and Edge browsers (the only major browsers lacking built-in WebM video support).

In cleaning it up for release, I’ve noticed some performance regressions on IE and Edge due to cleaning out old code I thought was no longer needed.

In particular, I found that drawing and YUV-RGB colorspace conversion using WebGL, which works fantastically fast in Safari, Chrome, and Firefox, was about as slow as on-CPU JavaScript color conversion in IE 11 and Edge — luckily I had a hack in store that works around the bottleneck.

It turns out that uploading single-channel textures as LUMINANCE or ALPHA formats is vveerryy ssllooww in IE 11 update 1 and Edge, compared to uploading the exact same data blob as an RGBA texture… 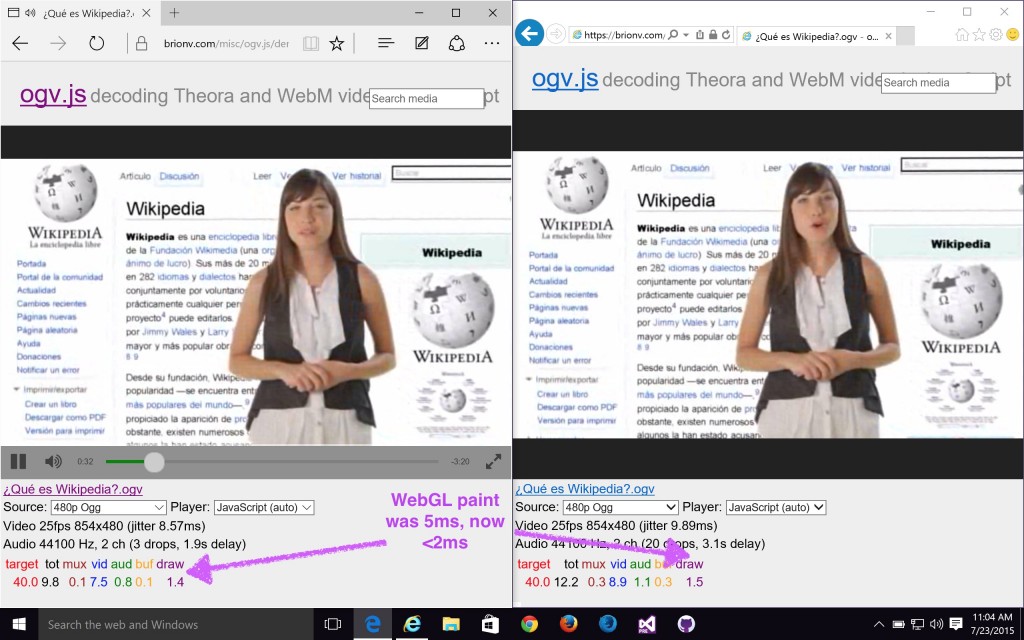 As it turns out, I had had some older code to stuff things into RGBA textures and then unpack them in a shader for IE 10 and the original release of IE 11, which did not support LUMINANCE or ALPHA texture uploads! I had removed this code to simplify my WebGL code paths since LUMINANCE got added in IE 11 update 1, but hadn’t originally noticed the performance regression.

Unfortunately this adds a user-agent sniff to my ogv.js code… I prefer to use the LUMINANCE textures directly on other browsers where they perform well, because the textures can be scaled more cleanly in the case of source files with non-square pixels.