Another thing I’ve been researching is safe, sandboxed embedding of user-created JavaScript widgets… my last attempt in this direction was the EmbedScript extension (examples currently down, but code is still around).

One way to isolate user-provided scripts is to run them in an interpreter! This is potentially very slow, but allows for all kinds of extra tricks.

I stumbled on JS-Interpreter, used sometimes with the Blockly project to step through code generated from visual blocks. JS-Interpreter implements a rough ES5 interpreter in native JS; it’s quite a bit slower than native (though some speedups are possible; the author and I have made some recent tweaks improving the interpreter loop) but is interesting because it allows single-stepping the interpreter, which opens up to a potential for an in-browser debugger. The project is under active development and could use a good regression test suite, if anyone wants to send some PRs. :)

The interpreter is also fairly small, weighing in around 24kb minified and gzipped.

The single-stepping interpreter design protects against infinite loops, as you can implement your own time limit around the step loop.

For pure-computation exercises and interactive prompts this might be really awesome, but the limited performance and lack of any built-in graphical display means it’s probably not great for hooking it up to an SVG to make it interactive. (Any APIs you add are your own responsibility, and security might be a concern for API design that does anything sensitive.)

An old project that’s still around is Google Caja, a heavyweight solution for embedding foreign HTML+JS using a server-side Java-based transpiler for the JS and JavaScript-side proxy objects that let you manipulate a subset of the DOM safely.

There’s no protection against loops or simple resource usage like exhausting memory.

I’ve looked at using cross-origin <iframe>s to isolate user code for some time, but was never quite happy with the results. Yes, the “same-origin policy” of HTML/JS means your code running in a cross-origin frame can’t touch your main site’s code or data, but that code is still able to load images, scripts, and other resources from other sites. That creates problems ranging from easy spamming to user information disclosure to simply breaking if required offsite resources change or disappear.

Content-Security-Policy to the rescue! Modern browsers can lock down things like network access using CSP directives on the iframe page.

CSP’s restrictions on loading resources still leaves an information disclosure in navigation — links or document.location can be used to navigate the frame to a URL on a third domain. This can be locked down with CSP’s childsrc param on the parent document — or an intermediate “double” iframe — to only allow the desired target domain (say, “*.wikipedia-embed.org” or even “item12345678.wikipedia-embed.org”). Then attempts to navigate the frame to a different domain from the inside are blocked.

Further interactivity with the host page can be created by building on the postMessage API, including injecting additional resources or data sets. Note that postMessage is asynchronous, so you’re limited in simulating function calls to the host environment.

There is one big remaining security issue, which is that JS in an iframe can still block the UI for the whole page (or consume memory and other resources), either accidentally with an infinite loop or on purpose. The browser will eventually time out from a long loop and give you the chance to kill it, but it’s not pleasant (and might just be followed by another super-long loop!)

This means denial of service attacks against readers and editors are possible. “Autoplay” of unreviewed embedded widgets is still a bad idea for this reason.

Additionally, older browser versions don’t always support CSP — IE is a mess for instance. So defenses against cross-origin loads either need to somehow prevent loading in older browsers (poorer compatibility) or risk the information exposure (poorer security). However the most popular browsers do enforce it, so applications aren’t likely to be built that rely on off-site materials just to function, preventing which is one of our goals.

There’s one more trick, just for fun, which is to run the isolated code in a Web Worker background thread. This would still allow resource consumption but would prevent infinite loops from blocking the parent page.

However you’re back to the interpreter’s problem of having no DOM or user interface, and must build a UI proxy of some kind.

Additionally, there are complications with running Workers in iframes, which is that if you apply sandbox=allow-scripts you may not be able to load JS into a Worker at all.

Note that if you can run JavaScript, you can run just about anything thanks to emscripten. ;) A cross-compiled Lua interpreter weighs in around 150-180kb gzipped (depending on library inclusion).

Here, have a big chart I made for reference: 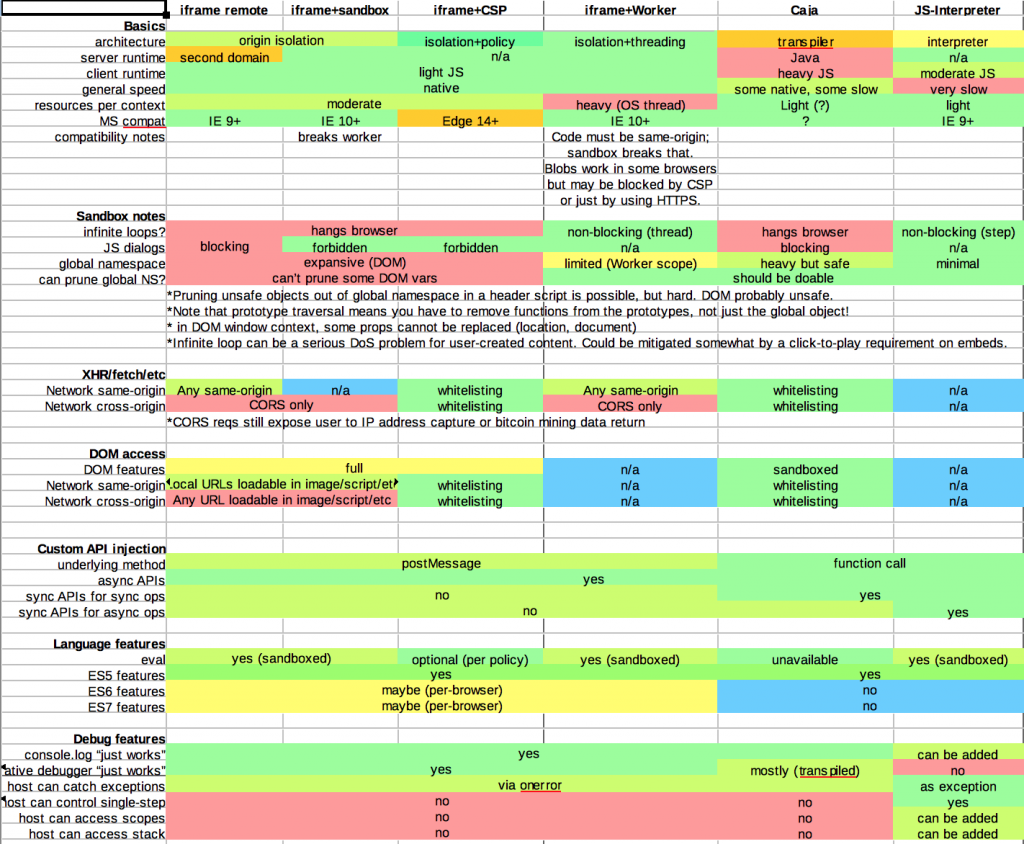 In principle the embedding sites can be offline-cached… bears consideration.

The iframes could be loaded in a webview in apps, though consider the offline + app issues!

A widget (or whatever you call it) would have one or more sub resources, like a Gadget does today plus more:

Widgets likely should be instantiable with input parameters like templates and Lua modules are; this would be useful for things like reusing common code with different input data, like showing a physics demo with different constant values.

There should be a human-manageable UI for editing and testing these things. :) See jsfiddle etc for prior art.

How to build the iframe target site

Even with the security guarantees of origin restrictions and CSP, there are new and exciting threat models…

Simple denial of service is easy — looping scripts in an iframe can lock up the main UI thread for the tab (or whole browser, depending on the browser) until it eventually times out with an error. At which point it can potentially go right back into a loop. Or you can allocate tons of memory, slowing down and eventually perhaps crashing the browser. Even tiny programs can have huge performance impact, and it’s hard to predict what will be problematic. Thus script on a page could make it hard for other editors and admins to get back in to fix the page… For this reason I wouldÂ  recommend against autoplay in Wikipedia articles of arbitrary unreviewed code.

There’s also possible trolling patterns: hide a shock image in a data set or inside a seemingly safe image file, then display it in a scriptable widget bypassing existing image review.

Advanced widgets could do all kinds of fun and educational things like run emulators for old computer and game systems. That brings with it the potential for copyright issues with the software being run, or for newer systems patent issues with the system being emulated.

For that matter you could run programs that are covered under software patents, such as decoding or encoding certain video file formats. I guess you could try that in Lua modules too, but JS would allow you to play or save result files to disk directly from the browser.

WP:BEANS may apply to further thoughts on this road, beware. ;)

Going back to Jupyter/IPython as an inspiration source; Jupyter has a separation between a frontend that takes interactive input and displays output, and a backend kernel which runs the actual computation server-side. To make for fancier interactive displays, the output can have a widget which runs some sort of JavaScript component in the frontend notebook page’s environment, and can interact with the user (via HTML controls), with other widgets (via declared linkages) and with the kernel code (via events).

We could use a model like this which distinguishes between trusted (or semi-trusted) frontend widget code which can do anything it can do in its iframe, but must be either pre-reviewed, or opted into. Frontend widgets that pass review should have well-understood behavior, good documentation, stable interfaces for injecting data, etc.

The frontend widget can and should still be origin-isolated & CSP-restricted for policy enforcement even if code is reviewed — defense in depth is important!

Such widgets could either be invoked from a template or lua module with a fixed data set, or could be connected to untrusted backend code running in an even more restricted sandbox.

The two main ‘more restricted sandbox’ possibilities are to run an interpreter that handles loops safely and applies resource limits, or to run in a worker thread that doesn’t block the main UI and can be terminated after a timeout…. but even that may be able to exhaust system resources via memory allocation.

I think it would be very interesting to extend Jupyter in two specific ways:

It might actually be interesting to adopt, or at least learn from, the communication & linkage model for the Jupyter widgets (which is backbone.js-based, I believe) and consider the possibilities for declarative linkage of widgets to create controllable diagrams/visualizations from common parts.

An interpreter-based Jupyter/IPython kernel that works with the notebooks model could be interesting for code examples on Wikipedia, Wikibooks etc. Math potential as well.