An early developer preview of Ubuntu Touch for Nexus phones and tablets has been released! Since I’m still waiting on the Nexus 4 I’m reserving for Ubuntu testing, I temporarily installed a tablet image on my Nexus 10. 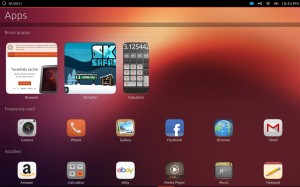 Be warned: this is a very early preview and is more demo-ware than usable operating system at this point. Don’t flash it on your primary phone/tablet or you’ll be mighty disappointed, I suspect. :)

I haven’t tested HDMI output yet.

I haven’t done more yet than firing up Qt Creator and fiddling with the demos on the desktop, but it’s interesting to see the development landscape shaping up.

Ubuntu Phone/Touch’s “native” UI toolkit is Qt, with emphasis on using ‘Qt Quick’ and QML+JavaScript for rapid development. It also allows for C++ Qt apps, including low-level OpenGLish things. There’s a sample port of some game that… doesn’t seem to work yet. ;)

Qt is a bit surprising as Ubuntu’s traditionally been GNOME/GTK+-focused. But it makes sense; it’s capable, developer-friendly, now has the declarative stuff like QML markup and first-class JavaScript support, and most importantly it’s also in use on other platforms like BlackBerry 10 and the (mostly dead or is it?) Meego. This could help with code sharing on ‘alternate platforms’… OpenGL-ish games probably will see this as no worse than Android, or possibly easier since there’s no Java/JNI stuff to play with for native apps.

At this stage there’s no comparison to Android; you just can’t get much done. But we’ll see as it matures…

One of the selling points is that Ubuntu Touch is supposed to be dockable and usable as a “real computer” when connected to a mouse and keyboard and external screen. However this doesn’t seem to be in the current versions, and it’s unclear yet how much better it will be than Android when docked. (Android also supports keyboards, mice, and external screens… but doesn’t as conveniently run existing Linux apps.)

The ability to write “native code” apps is probably going to be a big mark in favor of Ubuntu for things like games, which tend to be C/C++ and OpenGL-heavy. Though Mozilla’s done a lot of work with things like emscripten and WebGL making it possible to port C/C++ game engines to JavaScript, I suspect performance will always lag a bit on Firefox OS.

Ubuntu Touch also definitely supports high-DPI displays and tablet-size screens at this stage; it’s unclear to me whether Firefox OS is ready for high-DPI displays or larger screens. Even if it runs all the images in the apps are low-resolution so a lot of stuff might look blurry.

However, Firefox OS is much further along. It’s got a working app marketplace, a browser that doesn’t crash quite as constantly, and most importantly… has hardware partners who are already committed to shipping phones this year.

It looks like this version of Ubuntu Touch was kept as a skunkworks project for a while, then rushed out so it could be demoed at Mobile World Congress. Hopefully development will be more open from here out and it will improve rapidly.

The Wikimedia Commons uploader app we’re working on is coming along… Here’s the iOS UI as of yesterday:

When trying to post about behavior of web or mobile applications, a picture is worth a thousand words… but a video can be worth a thousand pictures. Videos can capture complex behaviors that are hard to fit into a screenshot, can be narrated, and show actual performance as well as the look of something.

Here’s a screencast of the upcoming Wikimedia Commons app importing a PDF from Keynote on an iPod Touch:

I’d stumbled upon some references to a performance monitoring tool called Eideticker that Mozilla’s using for the Android version of Firefox. This uses an HDMI video capture card to record live video output from a Galaxy Nexus or other phone, and can then mark timing of various on-screen events down to 1/60 second precision.

‘Blackmagic’, the company that makes the PCIe card Mozilla uses, also makes Thunderbolt-connected standalone widgets that are easier to connect to a MacBook Pro. I picked up the “Intensity Extreme“, which hides the (for me) unneeded analog video ports behind a breakout cable that I can stuff in a drawer.

See details on which devices I’ve gotten to work and more sample casts.