At the Google I/O conference this week they handed out Android Wear watches to attendees; I got the LG G Watch and have been gleefully wearing it for about a day.

Still have to try:

So there’s wide speculation out there that a larger-screened iPhone is coming to compete with the circa-5-inch generation of flagship Android phones.

But how would Apple actually engineer such a thing, and what would it mean for web and app developers?

There are a few possibilities to my mind, with various trade offs.

First, note that the iPhone 5 family has a 4″ 640×1136 screen, about 326dpi and using a 2x scale between UI points (aka “CSS pixels”). Software for iPhone had long assumed a 320×480 1x or 640×960 2x display, and when the new screen size was introduced, old apps were accommodated by showing them with black bars to simulate the older screen size.

The simplest solution would be to scale up the iPhone 5c/s design and screen by the same ratio as the iPad mini and iPad Air — this gives a 4.8 inch “iPhone 6″ that would have the same pixel density as the full-size Retina iPad. Developers would see the 4″ and 4.8″ devices as equivalent, with no changes needed to code or graphics. But, it might not provide the feeling of additional screen space because on screen elements would become larger to fit. The resolution, while still a respectable 263dpi or so would also fall noticeably short of the current crop of 1080p Android phones at 440+dpi.

Another possibility is to stick to the 326dpi density and change the screen’s pixel dimensions, say to 1280×720 at 4.5” or maybe a little higher. This would give more onscreen space, requiring app developers to ensure they handle the different dimensions. Older apps without AutoLayout might be handled by a black screen border like iPhone apps running on an iPad, or they might scale up and be a little blurry.

Some might scoff at such a change, but iOS SDK updates have made it easier to handle varying screen sizes, from iOS 6’s introduction of AutoLayout to iOS 8’s storyboard unification and mysterious “variable sized iPhone simulator”… The idea that Apple might spring a new form factor at us in fall 2014 is not any crazier than when they sprung the 4” iPhone 5 on us…

Still another question is whether Apple will follow the dpi race that they started with the iPhone 4’s “retina” screen… Would they make a 1080p phone in the 4.5-5″ range using a 3x display scale to match Android? There’s nothing in the iOS SDK that hints that way to me, but it’s plausible technically.

A 3x density scale might handle back-compatibility by rendering to a 2x frame buffer and transparently scaling up at some cost of blurriness, while newer apps use @3x artwork and render natively at proper scale.

This remains to be seen…

This should give a performance boost for ogv.js drawing, though I’ll have to test it on some devices… 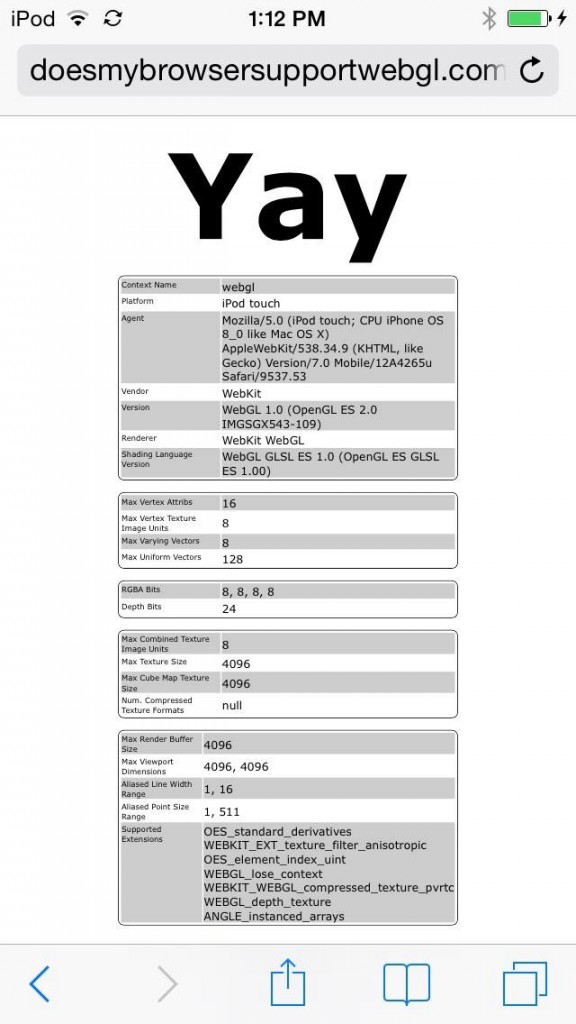