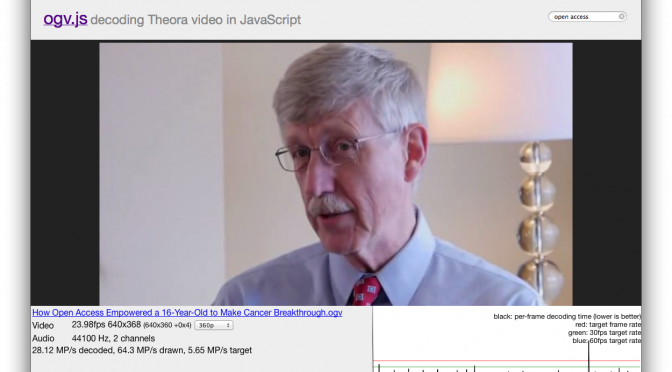 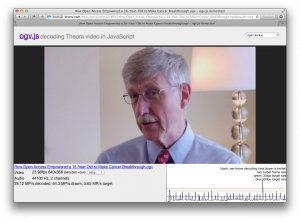 This works both with Web Audio in Firefox, Chrome, and Safari and with the Flash audio shim for IE; basically we have to keep track of the audio playback position and match up decoding frames with that. Took a little poking in the ActionScript code but it’s now working!

This brings us much closer to being able to integrate ogv.js as a fallback video player for Wikimedia on IE 10/11 and Safari 6/7. Thanks to the guys hanging out in #xiph channel who encouraged me to keep poking at this! :D

Additionally there’s now an override selector for the video size, so you can try decoding larger than 360p versions, or switch a slow machine down to the little 160p versions.

I’ve also started investigating an all-Flash version using Adobe’s Crossbridge, which if it works would be a suitable replacement for the Cortado Java applet on old browsers (think of all those IE 6/7/8/9 systems out there!). I seem to be able to build the ogg libraries but haven’t gone beyond that yet… will be interesting to poke at.